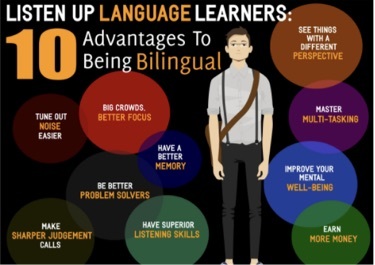 Researchers have found that multilingual people think faster and sharper. Not only this but also being bilingual makes people's brains more efficient and combat cognitive aging. Bilingual people's brain operates differently from single language speaker. They process information from other perspectives. It makes quite an impression, doesn't it?

In this scenario, we are quite lucky as our mother tongue is not English, but English forms the basis of most of the aptitude test, official work. It is the language in which all of India communicates, and as does the world. As a parent, our job is to ensure that we equip our wards with all the tools to make themselves. And being able to communicate in English is one such tool.

As is the case with a non-native tongue, learning a new language is a systematic and disciplined process. But it is worth the pain. And when one is younger, learning is easier as priorities do not bound the mind. It is not a means to an end but a part of the curriculum. Given the haste a grown-up has, one may miss the finer points of mastering the language.

The benefits of learning English as a second language, especially in the Indian context, are huge. Some of them are enumerated below:

While people may say that Hindi is also used in most parts, this conception is not very true as only 40% of Indians speak Hindi while it is considerably higher for English. This makes it a language in which India communicates often.

They will get more innovative with their concept formation, abstract thinking, critical thinking, writing, etc. These stimulating brain activities increase their memory power as well.

They learn to multitask between their other subjects and English classes. Being a hustler will prepare them for the upcoming pressure of higher studies.

Our parent's generation generally learned English from the 8th standard, if they were taught, and then worked hard to master it. This was in addition to preparing for boards, competitive exams and mastering other subjects. This would have been so easier had they learned it before. And perhaps this is the reason why they wanted us to learn it as early as possible and learn it right.

So there is a thrust on learning the grammar, the rules. PlanetSpark helps realize this by providing qualified teachers and study material in the vicinity of your home. This makes things easier to learn English in a more relaxed atmosphere, and the course is more customized to the needs of the student rather than what comes next to the school's curriculum.